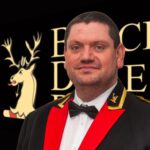 Gavin started playing a brass instrument at the age of seven in the Deiniolen Youth Band. He moved to Tuba at the age of 10 and started taking brass playing seriously following a lesson with Black Dyke legend Colin Aspinall. He quickly progressed to county groups and the North Wales Youth Orchestra. He became a member of the National Youth Brass Band of Wales, leading the Tuba section for several courses.

His school days saw Gavin win several prestigious awards for his playing and he developed into an accomplished soloist as well as an ensemble player. He completed his undergraduate studies at the University of Salford where he specialised in Musical Performance and Arts Administration.

Gavin has been a member of some of the finest brass bands including Leyland, Fairey, Yorkshire Building Society, and Cory. Personal career highlights include being awarded the City of Bergen Soloist Prize at the 2003 European Brass Band Championships and being a guest soloist at the International Tuba and Euphonium Association Conference. In 2003 Gavin was nominated as Player of the Year on the respected website 4barsrest and has been regularly chosen for their annual Band of the Year selection. As a soloist, performer and clinician Gavin has performed and held workshops across the world including in Norway, Switzerland, USA, Australia, Brazil, Sweden, Italy, Germany and throughout the UK. As part of Black Dyke he was featured as a soloist on the band’s tour of Japan in 2019. As well as being a player Gavin is no stranger to the conducting baton having led several local bands to Regional and National successes.

An Arts Administrator, Gavin was a long-time executive member of Tŷ Cerdd, which supported all the national youth activities as well as supporting community music throughout Wales. He is currently on the music panel for the National Eisteddfod of Wales, and adjudicated instrumental competitions at this prestigious event in 2019.

Gavin is also involved in the academic world and as well as being a tutor at Bangor University, he has also held the same post at the University of Salford. He is currently Tuba tutor for the NYBBW.