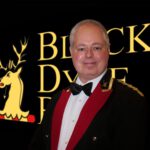 Born in Manchester, John lived for most of his childhood in Preston, and it was here that he first started playing brass instruments. Starting on Trombone, John quickly switched allegiance to the cornet and never looked back.

He began to play with the Lancashire Evening Post Junior Band, with whom he appeared on an edition of the BBC children’s programme Playaway. He moved into the senior band ultimately becoming principal cornet and concurrently was also a member of the Lancashire Youth Brass Band on the Solo Cornet bench.

John’s musical pedigree is extensive. 1988 saw him studying for a Graduate Diploma in Band Musicianship at Salford College of Technology. Here he studied conducting and arranging and composition and was lucky enough to take composition lessons with the renowned Elgar Howarth. Membership of the College Band also led John to go on a number of prestigious tours including tours of Holland, Hungary and the Soviet Union – the first brass band ever to do so. He also joined The Trafford Band on Solo Cornet and Repiano Cornet and became conductor of the Trafford Junior Band.

Graduating from Salford, John took up a position as Principal Cornet of the Ensemble de Cuivres d’Ajoie in Porrentruy, Jura, Switzerland – a British style brass band competing in the Championship section. He worked as a peripatetic brass instrumental tutor and was conductor of the local town band the Fanfare Municipale de Porrentruy, living in Switzerland from August 1988 – June 1990.

Returning to the UK he re-joined The Trafford Band on Principal Cornet until 1991 when he joined Wingates Band on the solo cornet bench, where he played until June 1999. Following a chance meeting with Alison Childs at a CD recording in Smithills School, he was invited down to Black Dyke Band where James Watson offered him a position on Second Cornet.

Returning to full time education in 2001 John became Teacher of Music at a Secondary School in Bolton before becoming Head of Music in 2005. In December 2014 he sought fresh challenges and moved into Primary teaching, where he is working at the present time.

John says that he was very lucky in 1993 to get married to a very understanding young lady, Joanne, also a Cornet player who he had met whilst both were students at Salford, and together they have a teenage son.

In the summer of 2018 he was invited to become Secretary of the Black Dyke band, a role he continues to fulfil.