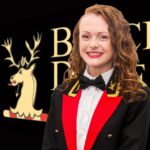 Logan started playing percussion at the age of five, receiving lessons through Kirklees Music School from Matthew Delaney. In 2001 she joined her village brass band (Golcar Band) and played Timpani with them at her first Yorkshire Area Championships in 2002 aged just nine.

After a short spell of playing with the Holme Silver Band, Logan joined her first Championship band in 2006 – ‘The Yorkshire Coop Brass band’. During her time with the band she featured as a soloist on their 10th anniversary CD playing ‘William Tell overture’, accompanied artists including Russell Watson and Catherine Jenkins and also participated in various contests including the French Open and the Butlins Mineworkers Championships. In 2010 she moved to The Skelmanthorpe Band shortly before going to study Music at the University of Huddersfield in 2011, majoring in Performance under Chris Bradley, Principal Percussion at Opera North.

As a member of the University of Huddersfield Music department, she participated in various ensembles, one being The University Brass Band under the direction of Phillip MCcaan. In this ensemble she led the percussion section and also featured as a soloist performing in venues such as Leeds, Dewsbury and Huddersfield Town Halls. While at University Logan worked as a freelance percussionist working with various brass bands, orchestras and function bands, and during this time she took part in her first National Finals with NASUWT Riverside Band.

Logan Graduated from Huddersfield University in July 2014 and joined the Carlton Main Frickley Colliery Band, with whom she took part in her first British Open Contest.

Logan joined the Black Dyke Band in 2018 and has had the opportunity to perform in some amazing places and venues, a highlight being a featured soloist at the Tokyo Metropolitan Theatre Concert Hall in Japan.

Logan currently works as a Percussion Teacher with her local music service ‘Musica Kirklees’. Through this organisation she is the Musical Director of the ‘Holme Valley Percussion Ensemble’ and co –director of the ‘Musica Youth Brass Band’.  She also teaches one to one percussion lessons to children identified as having a barrier to learning including; autism and challenging behaviour, English as a second language and low self-esteem.

Logan has recently been appointed Percussion teacher at the local Grammar school.