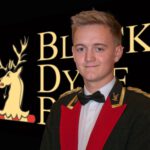 Matt has been a member of the Black Dyke Band percussion section for over seven years, joining in 2013. In his time with the band Matt has won The British Open (2014), The National Finals (2014), The European Championships (2015) and 4 Yorkshire Area titles.

As a band member Matt has performed across the world on the most iconic of stages. Three tours of Japan playing in and experiencing cities like Tokyo, Osaka and Sapporo have been real highlights. Similarly, the annual concert in the KKL, Lucerne (Switzerland), performances in New York City and across Europe combined with frequent performances in the UK’s leading concert halls such as The Royal Albert Hall and Birmingham Symphony Hall are all real highlights and for him make being in Black Dyke a special privilege.

Other notable accolades Matt has achieved with his colleagues in Black Dyke is being part of a No.1 Classical Album (Rutter: Anthems, Hymns and Gloria for Brass Band) and performing on the Pyramid stage, Glastonbury, sharing the bill with artists such as Jamie Cullen, Barry Gibb and Ed Sheeran.

Matt is looking forward to even more successful and fruitful years with Black Dyke Band and is excited to return after the enforced Sabbatical of the Covid-19 pandemic.