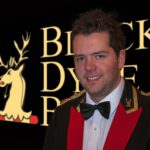 Ben joined the Black Dyke Band in December 2012. During his time with the band Ben has been privileged to win the European, National and British Open titles along with four Yorkshire Area Championships. The 2017 Yorkshire area victory, playing “Pageantry”, was a particular highlight for Ben as this was during the six-month period he deputised on Solo Baritone.

Ben has had many incredible experiences performing in some of the greatest concert halls across the world including those in Japan, USA, Switzerland and Norway. This global travel has been complemented with regular performances at many of UK’s best venues such as the Royal Albert Hall and Symphony Hall Birmingham.

In addition to playing in the band Ben has been responsible for the band’s social media channels for the last three years. His efforts have helped promote Black Dyke around the world and engage with supporters, significantly growing our online following.

Outside of his band duties, Ben is teacher of Maths at Wardle Academy in his hometown of Rochdale. He is also a partner in an event promotion company which organises music festivals such as Little Glastonboro.