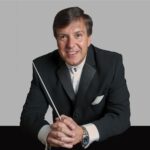 Hailing from Wales Professor Nicholas Childs is heralded as a leading figure in the world-wide brass community and has achieved the highest international reputation as a performer, teacher-clinician, conductor, interpreter and advocate of new music and producer of pace-setting recordings.

He has had phenomenal success with many bands, including highly acclaimed National titles and European championships.  His current tenure as Principal Conductor and Director of Music of the Black Dyke Band has been marked with continued contest success, most recently in claiming the 2014 British Open and National Brass Band Championships of Great Britain, being given the Harry Mortimer Maestro Award for his outstanding ability as a conductor and being named the 2014 Conductor of the Year by 4br.com and Brass Band World (magazine).

As one of the world’s most recognized masters of the euphonium and a brass specialist, Nicholas has performed and taught throughout the United Kingdom, Europe, Australia, Africa, the Far East, Canada, and the United States. He has appeared with such groups as the BBC Philharmonic, the Hallé Orchestra, the United States Marine Band (“The President’s Own”), the London Symphony Brass, and the Canadian Brass.  In addition, he has been featured with nearly every major brass band throughout the world and many wind bands, especially in University settings within the United States, where he has been equally acclaimed for his teaching and clinic work.

As a Conductor he has enjoyed phenomenal success on the contest and concert platform and has conducted at the most prestigious music events including the Harrogate International, Cheltenham and City of London Festivals. He made his BBC Proms debut in 2007 and has conducted on numerous critically acclaimed CDs including Black Dyke/Elgar in which he shared the baton with Sir Colin Davis. He made his New York conducting debut at the Centennial Memorial Temple in 2016, and in June 2017 made his debut at the Glastonbury Festival.

His commitment to new work and enlarging the musical literature of the brass world has seen him premier many new works with the Black Dyke Band by leading British composers such as Michael Ball, Arthur Butterworth, Martin Ellerby, Kenneth Hesketh, Elgar Howarth, Peter Meechan, James McMillan, Rodney Newton, Ian Wilson and Paul Mealor. He has presented innovative concert programs with new and appealing music and his recordings with Black Dyke Band have been heralded as the very best in the brass band world including multiple CD of the Year awards. Among these are outstanding collections of the music of Eric Ball, Edward Gregson, Peter Graham, Wilfred Heaton, and Philip Wilby.

Nicholas gives important emphasis to the development of the brass band movement. This comes via his commitment to the training of outstanding young musicians both at the collegiate level as well as within the National Youth Brass Band of Great Britain, the Yorkshire Youth Brass Band, and the National Children’s Brass Band of Great Britain (founder and music director). He currently serves as Professor of Music at the Royal Northern College of Music, where he has taught for over fourteen years.

Representative honours that have been given to Nicholas include an Honorary Doctorate from Leeds Metropolitan University where he served as Professor in Music and Recording, the Iles Medal from the Worshipful Company of Musicians in recognition of services to brass bands, and the Freedom of the City of London.

Nick is married to Alison who plays tenor horn with Black Dyke and their daughter Rebecca who plays baritone, studied Performance and Conducting at the University of Salford, gaining a First Class Honours Degree, and is now a Primary School teacher.