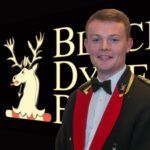 Hailing from Stockport, Mike began playing the baritone horn aged just eight. Growing up in Stockport Schools’ Brass Band, he subsequently joined the National Youth Brass Band of Great Britain (NYBBGB) where he held the Principal Baritone seat for five years under the direction of renowned conductor Bramwell Tovey.  Whilst at the NYBBGB, Mike performed as part of the BBC Proms at the Royal Albert Hall live on BBC Radio 3 and was a recipient of the coveted Maude Wright Award; the Harold and Bernard Tovey Award for excellence; the Harry Mortimer Concerto Soloist Award and the Katie Ogden Soloist Prize.

In January 2014 he accepted the position of Solo Baritone with the world famous Grimethorpe Colliery Band and after a short period with Brighouse and Rastrick Band, Mike joined Black Dyke in January 2020.

In June 2016 Mike graduated with First Class Honours from the Royal Northern College of Music (RNCM) under the tutorship of Professor Steven Mead and Dr. David Thornton. Whilst at the RNCM he was a co-founder of the multi award-winning A4 Brass Quartet and developed into a distinguished chamber musician.  With A4 Brass Mike has won the internationally recognised Royal Over-Seas League Chamber Music Competition (2018); the Royal Philharmonic Society Henderson Chamber Music Prize (2018); a Tunnell Trust Award (2017); the Tillett Trust Young Artists’ Platform (2017) and selection as 2018 City Music Foundation Artists. He regularly works with Live Music Now! and Music in Hospitals & Care, helping to transform lives through the power of live music.

Mike prides himself on taking the Baritone to new audiences and venues for the instrument and performance highlights with A4 Brass include appearances at Wigmore Hall, Cadogan Hall, Bridgewater Hall, Queen Elizabeth Hall and Purcell Room in addition to concerts in Lithuania, Finland, Switzerland, the Channel Islands and the Isle of Man.  In June 2018 A4 Brass completed the prestigious RNCM International Artist Diploma in Chamber Music as John Fewkes Scholars and were subsequently invited to become Honorary Associate Artists of the RNCM in recognition of the quartet’s success in the music profession.

As a band member, Mike’s performance career has taken him to many of the U.K’s leading concert venues including the Royal Albert Hall, Symphony Hall, The Sage, Snape Maltings and Perth Concert Hall, in addition to performing overseas in Australia, Uganda and France. In March 2020 he was delighted to accept the invitation from Besson/Buffet Crampon to become a Besson Artist and Consultant.