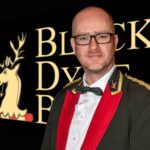 Neil began playing Trumpet at Primary School at the age of 9 in his home town of Newport, South Wales. When aged 11, he joined Newport Borough Brass Band on Cornet. After six months on Cornet, Neil was asked to move on to Euphonium and found that the instrument was a much better fit for him.

At the age of 13, Neil auditioned and gained a place in the Gwent County Youth Band under the leadership of Alun Williams, where he remained a member until the age of 21. During this time, he was also a member of the National Youth Brass Band of Wales.

Studying at the University of Salford under the leadership of David King, he forged his first link to Black Dyke as his first Euphonium tutor was Professor Nicholas Childs. In his second year at Salford Neil made the decision to switch to Percussion playing because he simply enjoyed it. It was clear that this move was a natural fit for him as after six months of playing Percussion, David King asked him to join Yorkshire Building Society Band.

Neil’s time at YBS was short lived as he was invited to audition for Black Dyke Band under the leadership of James Watson. It had always been a dream of his to play with Black Dyke, so Neil jumped at the chance. Neil joined the band in November 1997 and has always been a highly regarded band member. Over the last 20 plus years with the band, he has been a part of many winning performances at the Yorkshire Area, English Nationals, British Open, National Championships and European Championships.