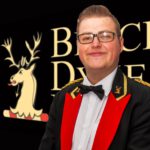 Hailing from the North of England and born into a musical family, (his grandad a cornet player in the RAF, mother a tenor horn player, and father a trombone player) music has been a huge part of Adam’s life.

He started playing the Trombone aged 10. Following encouragement from his teacher, Crawford Hall, Adam moved to Bass Trombone when he was 14. Soon after he joined his local ensemble, the North Skelton Band. He spent 18 months with them, and during this time he also joined the National Youth Brass Band of Great Britain.

His musical development continued with the Fishburn Band for 18 Months, before he joined The Reg Vardy Band in 2011, where he remained for seven years. It was during this time Adam also played for the Black Dyke Youth Trombone Quartet, enjoying a fantastic tour to the Great American Brass Festival in Danville, Kentucky.

Adam was a member of the National Youth Brass Band of Great Britain from 2010 to 2013, becoming principal Bass Trombone in 2013. Whilst a member he enjoyed many wonderful concerts including a notable performance at the BBC Proms.

Adam officially joined the Black Dyke Band in 2018, having helped the band regularly since 2017. With the band he has enjoyed great concerts, contests, and tours, with personal highlights being tours to Japan, and performing at the National Finals and British Open. In the band, Adam also enjoys sitting next to his dad – Garry Reed – who has always been a huge inspiration to his playing career.

In Adam’s personal life he works for the Geneva group, a musical instrument manufacturer, having been with them since he was 16. His roles have ranged from Instrument Technician and Repairer, to his current role as a Graphic Designer.