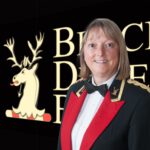 Alison started reading music when she was seven years old. Her first instrumental experience was playing recorder and piano, and she only began playing brass at the age of 10, when she borrowed her brother’s cornet, and joined the school band. She quickly rose through the cornet ranks and became the first female Principal Cornet of the Blue Coat School Band.

Alison has an excellent band pedigree. She first joined Blackley Band, where her brother also played, starting as 3rdcornet, but quickly moving to 2nd solo cornet, before making the move onto solo horn. After 11 years with Blackley, she had a short spell at Newton Heath before joining Championship section band Rochdale Wilsons, winning several Best Soloist Awards.

In 1989 Alison accepted the 1st horn seat at Foden’s (Britannia) under the baton of Howard Snell, where she stayed until having a baby. It was with Fodens that she became a proud winner at the European Championships in 1992. Other highlights with Fodens were being victorious in the UK Entertainment Contest, All England Contest and the BBC Band of the Year competition.

Alison has been a playing member of the Black Dyke Band since June 1999, when James Watson asked her to join. Highlights have been during her time with the band however, winning the British Open, National Championships and European titles are amongst those she ranks highest.

Throughout a long and illustrious career, she has been privileged to play in some of the most amazing concert venues in the world: Sydney Opera House, KKL Lucerne, Tokyo Metropolitan Theatre, as well as enjoying many TV and Radio appearances and music festivals – including notably the Pyramid Stage at Glastonbury! She has also enjoyed making many recording sessions with bands throughout the UK and Europe and is a past Producer and Director of Doyen recordings.

Since 2007 she has been the Administrator for the International Brass Band Summer School, which is held once a year at Swansea University, which attracts some 120 delegates from countries around the world.

Despite all her success Alison says that she still has the desire to keep playing and performing at the highest level, something she hopes will continue for a long time!