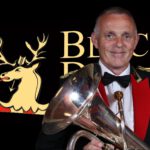 My earliest memory in a banding career which spans more than 5 decades was the day Marcus Newton delivered a cornet to my parent’s house. It had been arranged by my Dad, Cliff, that I would start learning the instrument with the Winterley Methodist Chapel Silver Band, starting the following Thursday. The band’s main function was to raise funds for the Chapel playing hymns street to street around the local villages on Sunday mornings, and Carols at Xmas, including Christmas Day….I never got to enjoy presents until well after midday!

Two years later I’d graduated to Principal Cornet with Berisford’s Junior Band under the great Charlie Cooke who was unbelievably generous with his time; he remains to this day one of the finest brass players I’ve ever heard play. I played with the Junior & Senior Bands for five years, then one day Charlie told me he’d arranged an audition with James Scott, Musical Director of Foden’s Motor Works Band. I remember feeling quite nervous being in their bandroom playing for such a famous conductor and my rendition of Zelda probably wasn’t the best, but I was offered a position on the cornet section front row.

I played for this famous Truck Makers works band for 18 years even doing an engineering apprenticeship in the factory which shaped my entire professional career. After the demise of the factory, the band continued with sponsorship, enjoying great success under the baton of Howard Snell. We triumphed in all the major entertainment contests plus a victory at the European Championships with a stunning performance of Year of the Dragon. By this time I had seen the light, moving from cornet to euphonium and playing next to a certain Mr. Childs (Nick)!

Despite these great performances we still didn’t have a Major contest win so when I got a call from Bob Childs asking if I’d be interested in the 2nd Euphonium position at Black Dyke, I simply couldn’t say no. Within one year of joining, we’d won National and British Open titles and there were plenty more to come. Contesting success has always been the bedrock of Black Dyke’s reputation but I discovered so much more…..amazing concert venues worldwide, TV appearances, music festivals and the incredibly high standard of musicianship that keeps them there. 26 years later I still want more!