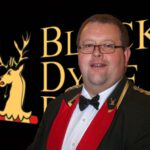 Born in Tredegar in South Wales, Matthew spent his childhood in Abergavenny. His first taste of music came when he was seven and he started taking piano lessons. When he was ten his teacher recommended that Matthew should try another instrument, so he went along to Abergavenny Borough Band and was given a baritone to play on.

Schooled at King Henry VIII Comprehensive School in Abergavenny, he received excellent tuition there from Alun F. Williams (former Head of Gwent Music Support Service). He also received guidance and benefited from the experience of Eric Powell at Abergavenny Borough Band (whom Eric conducted for over 40 years). He moved from baritone onto Eb Bass when he was 13 and then onto Bb Bass when he was 15.

In June 1995 Matthew was invited to join the Black Dyke Mills Band. In his 25 years of playing with Black Dyke there have been many highlights. On the contest front winning two doubles (1995 & 2014) and winning two triples (2004/5 & 2014/15) stand out. On the concert front the highlight would be the privilege of being able to perform in some of the most fantastic concert halls in the world, like Sydney Opera House, Toyko Metropolitan Hall and the KKL in Lucerne.

Matthew relishes the opportunity to put something back into youth music. He is involved in several projects with aspiring youngsters from all over the country. He is currently the Tuba Tutor with the National Children’s Brass Band of Great Britain, as well as the youth bands of Yorkshire and Gwent.

In his professional life Matthew teaches Music and Performing Arts at The Sixth Form, Bolton. When not at work or band, Matthew enjoys socialising and spending time with his family.