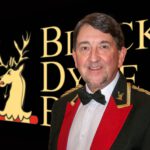 Born in Stoke-on-Trent, Philip cut his musical teeth playing violin and recorder in primary school. At senior school he auditioned for the school brass band and was given a Tuba, much to the disappointment of his parents and neighbours! Despite this he made good progress on the instrument and became a member of the City of Stoke-on-Trent Youth Orchestra and also the North Staffordshire Symphony Orchestra.

These formative experiences were pivotal in his decision to move to Manchester to study Tuba and Piano-  firstly at The Royal Manchester College of Music and then at the Royal Northern College of Music. After graduating, he began a successful career as a freelance musician and instrumental teacher.

His playing has taken him around the world: Japan, Australia, USA, Bermuda, Sierra Leone, Canada, as well as Scandinavia and Europe, performing in many iconic concert halls including Sydney Opera House, Carnegie Hall, KKL Lucerne, Tokyo Metropolitan Theatre and of course the Royal Albert Hall and even at Glastonbury Festival.

Philip has performed with many leading orchestras such as the Halle, BBC Philharmonic, Liverpool Philharmonic, Welsh National Opera and Manchester Camerata. He has played on over 200 CDs, with artists as diverse as Elton John, Peter Gabriel, Tori Amos, Fairport Convention and The Beautiful South, as well as making many radio and T.V appearances.

Despite this wide-ranging musical journey, brass bands have always been a major part of his music-making, playing with the CWS (Manchester) Band under the legendary Alex Mortimer and then in 1985 moving to Black Dyke, for whom he is currently the longest serving player. With Black Dyke he has won the English National, British Open, National and European Championships multiple times, including two ‘Grand Slams’!

Music education is a real passion in Philip’s life, and he has organised and taken part in many workshops and education projects. After several years as a specialist instrumental teacher, he became Director of Music at William Hulme’s Grammar School in Manchester, a position he held for over twenty years. He is also a former member, tutor and now Trustee of the National Youth Brass Band of Great Britain.

He has conducted several bands and ensembles both in England and Europe and is in much demand as a guest conductor.  As well as Black Dyke, he has also had a long association as Musical Director of the Delph Band – 2020 saw his 40th Anniversary with them – winning many titles including the National Championships of Great Britain on two occasions.

Philip’s wife and daughter are both brass players, and it is their support and understanding that allows him to to continue his career at the very highest level.