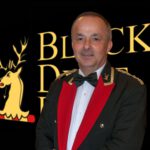 Keith began learning to play a brass instrument at the age of 10. His late father took him to their local village band rehearsal, ( Barnetby Silver Band ), and asked if they had a learners class. They did, and Keith was given the only  instrument left in the cupboard, a flugel horn, and the rest, as they say, is history.

At 13, he successfully auditioned for the National Youth Brass Band of Great Britain. Other members of the band at the time were, Alan Morrison, Robert Childs, Nicholas Thompson and Alan Wycherley, to name a few. A couple of years later he was offered a position on the solo cornet bench with the Desford Colliery Band – James Watson was the band’s principal cornet at the time. Keith spent 14 happy and successful years with Desford, especially enjoying the eight years that Howard Snell was the Musical Director.

After an eight-year break from “banding” and a brief spell playing with the GUS Band, James Watson asked him if he would be interested in joining Black Dyke, an invitation he readily accepted.

He has been a proud member of the Black Dyke Band since 1995, and the band’s librarian since 1998. Major contest wins, tours of Bermuda, Canada, Japan, USA, performing in some of the world’s best concert halls, CD recordings, are all among a long list of highs during his time with the band.

Away from the band, Keith is a brass and woodwind teacher, giving private tuition, and, teaching in schools, in Leicestershire, Rutland and Northamptonshire. When the band’s busy schedule allows, he enjoys spending time with his family. He is also a keen angler, enjoying both coarse fishing and flying fishing whenever he can. He occasionally plays golf, but not as much as he would like, and he is an avid Leicester City fan.