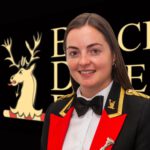 Laura began playing the cornet aged just six. Quickly progressing through the ranks of the award-winning Wardle Academy Youth Band she became their principal cornet player aged 13, a position she held for 5 years. During her time with the band, Laura gained vast experience performing in world renowned venues such as the Royal Albert Hall, Symphony Hall Birmingham, and Bridgewater Hall, as well as winning major titles including the National Youth Brass Band Championships and European Youth Brass Band Championships.

Post A-Levels, in August 2016 Laura went to Norway to undertake a one-year brass band course at Manger Folkehøgskule. Whilst there she was tutored by Jane Westervik and Henning Anundsen. The highlight of her time with the Manger Folkehøgskule Brass Band was appearing as principal cornet for a concert at the Grieg Hall. Whist in Norway she also travelled to Bergen to play for Manger Musikklag and held both repiano and solo cornet positions. She performed in Norway’s most prestigious contests – the Norwegian Nationals and Siddis Brass. Returning to the UK, Laura accepted the invitation to become the repiano cornet player of the Fairey Band.

Currently completing her final year of undergraduate studies at the Royal Northern College of Music (RNCM), Laura is studying with leading virtuosos of the cornet, Richard Marshall and Dr. Roger Webster. Whilst at the College she has also received tuition from Professor David King, John Miller, Tracey Redfern and Alexis Demailly. A recent performance highlight was appearing as principal cornet with the RNCM Brass Band at the Brass Band Festival, conducted by Dr. David Thornton and Anna Hartmann.

In October 2018 Laura fulfilled a lifelong dream and accepted an invitation to join the Black Dyke Band. Since joining she has become an accomplished member, covering on both the repiano cornet and flugel horn seats on various occasions. She has also performed with the band to sell-out concert venues both within the UK and overseas, including the KKL Luzern and Tokyo Metropolitan Theatre and won her first title in championship section banding at the Yorkshire Area in March 2020.

Recently discovering an enthusiasm for chamber music, she is a co-founder of the newly (2020) established brass quartet, Northern Quarters. The group are currently working towards concerts at both the RNCM and Leeds Town Hall in the beginning of 2021.

Laura is a keen educator with over three years of experience in private tuition and as a tutor for the Fermanagh Tyrone Brass Band Summer School and Yorkshire Youth Brass Band at present. In September 2021, Laura plans to complete a postgraduate teacher training course in Primary Education. In her spare time, she loves travelling and sports!