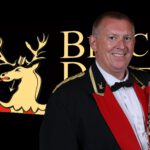 Hailing from Plymouth, Tim’s introduction to banding started at an early age. He would accompany his dad to band to watch him play with the Plymouth Silver Band. At the age of 11, Tim joined the junior band and learnt to play the cornet eventually working his way into the senior band. The band changed its name to The Royal British Legion Crownhill Plymouth Band and Tim worked his way up from 3rd cornet to Principal.

When he was 17, Tim left the band to join the British Army as a bandsman, turning his hobby into a profession. After completing two years training at the Army Junior School of Music he was posted to The Royal Hampshire Regimental Band in Londonderry, Northern Ireland. In 1994 Army bands were restructured and he became the Principal cornet of the newly named Minden Band of the Queens Division. The band remained in Colchester until relocating to Bassingbourn in Hertfordshire.

During this time Tim pursued his love of Brass Bands and joined the Ipswich Co-op Band as Principal cornet where he remained until 1999 when he joined the Rothwell Temperance Band, which is where he met his future wife Joanna who also played the cornet. This was Tim’s first taste of high level playing in Yorkshire. Tim was awarded LRSM in cornet performance in 2000 gaining distinction.

2002 saw Tim leaving Rothwell to become Assistant Principal of The Grimethorpe Colliery band sitting next to Richard Marshall. In the same year Tim was posted to the Normandy Band of the Queen’s Division stationed in Catterick, North Yorkshire. Tim was deployed on operations to Iraq during 2003 where he was attached to 34 Field Hospital in Basra on the front line. 2006 saw another restructure of Army bands and Tim was posted back to his old band, The Minden Band in Hertfordshire. In 2009 he was deployed on operations to Afghanistan staying at Camp Bastion and Kabul. It was in 2010 that Tim was first asked to join Black Dyke Band on Solo Cornet. This was a childhood dream and something his late father would have been immensely proud of.

In 2011, after completing 24 years’ service, Tim retired from the Army and settled down with his family in Wakefield, West Yorkshire. Banding still took up a major portion of his time and in 2012 he returned to Rothwell on Principal Cornet where he remained until 2016 before returning to Black Dyke.

Tim now runs his own professional dog walking business in the surrounding areas of where he lives which allows plenty of time for family and band pursuits. Tim married his wife, Joanna, in 2004, and they now have two daughters Isabelle and Maisie.